First, create a directory to keep your new Django project nice and organised.

Then move into that created folder.

Before installing Django and starting a project, it is good practice to create a virtual environment (venv) first. That way all package installations are locally installed, and you can then create a list of all the dependencies for the project.

Since Python 3.5 the module venv is the default way to make virtual environments, replacing pyvenv.

Then you can run the following command to activate your created virtual environment. And install the latest version of Django onto it.

You can then verify which version of Django you installed. Which can be helpful in the future when debugging your code. As the official documentation is viewable for specific major releases.

Creating the base project

In comparison to other Python web frameworks, such as Flask. Django comes with some very useful setup files, after you initialise the project.

This creates the following directories and files in your root directory (django_project/):

When deploying your website in the future, it's required to have either one of these files. So that you can direct an application server towards your project (e.g. gunicorn, mod_wsgi, daphne).

The settings.py file is used as a configuration file for your Django project.

With all Python packages, there needs to be an __init__.py file, to let Python know that this directory should be viewed as a package.

You should then be greeted with the following web page. 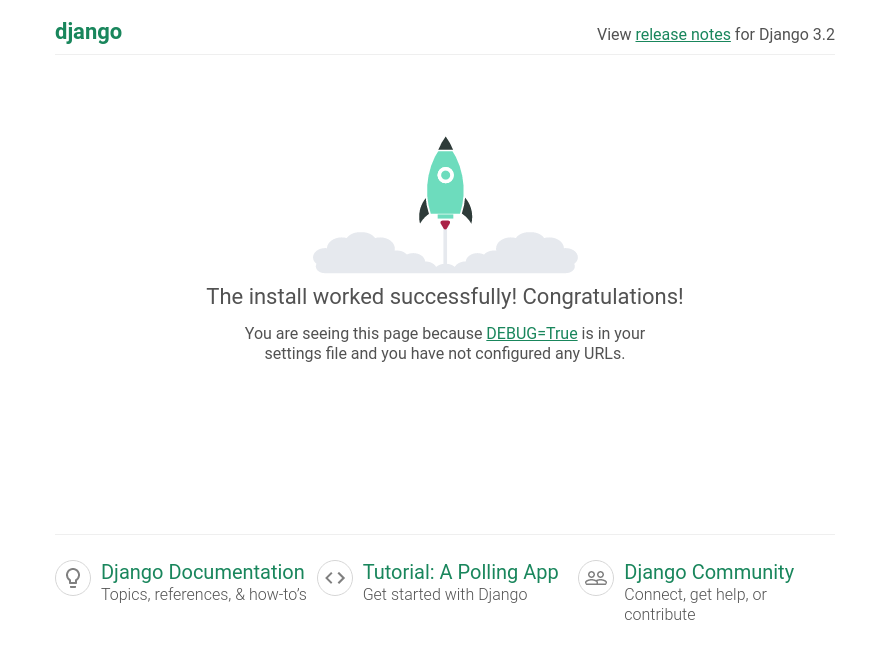 Then, when you get the success message. You can quit the server by entering Ctrl-C.

As you may have noticed, there was an error on "unapplied migrations" for certain Django apps. For now this can be ignored. As applying database migrations will be something you will become used to when building out your Django project.

You will also find a created "db.sqlite3" file created alongside your manage.py file and project/ directory. This will be project database, until you change it within project/settings.py.

You can change which port the development server runs on. By adding a port number argument at the end of the runserver command.

Here, you can also change the ip address if you want to run a development server on different servers on your network.

After going through this post, you should now be able to;

The next advised steps to take now, would be to start creating your first Django app! And I'd always recommend to combine this guide with the many others found online (i.e. documentation, youtube, other articles). That way any knowledge gaps can be filled and preferred development techniques can be worked out.

Hopefully, you have been able to follow these first few steps for getting started with a Django web project. If you have any questions, recommendations or found any errors with this post. Please let me know, in the comments below.